Where Our Oil Comes From

For over a hundred years the Hinaris family has been producing olive oil in Messenia, a region in southwestern Greece known for its hot extended summers and mild winters, the perfect climate for growing olives.  There is an olive oil tradition in our family:  our oil comes from the area surrounding the towns of Kyparissia and Christianoupolis, where our family has lived and produced olive oil for generations.

Shown below is my husband’s grandfather supervising the olive harvest.  At the time this photo was taken in the 1930’s, harvesting was done by handpicking the olives.  Now many olives are harvested by hitting the tree branches with long sticks or rakes to knock the olives to the ground, where they are collected in large nets spread under the trees.  The olives for The Olive Table’s extra virgin olive oils are harvested according to the old method of handpicking – which prevents bruising and therefore preserves the quality of the olives – and are then crushed within hours of being harvested.  The resulting oil has a texture that is buttery, melting, and thick but light, and the taste features a perfectly balanced complexity – fruity with a slight bitterness that flows into a peppery finish.

We import our extra virgin olive oil from our own private reserve in Kyparissia and from other family groves in Christianoupolis.  We then bottle it here in the US.  Since there is no middleman involved, we can assure you of the purity and freshness of the oil and can bring you high quality oil at a reasonable price.  Unlike many other oils which are blended from oils produced in more than one country, or from more than one variety of olive, our oil is a mono-varietal made only from the Koroneiki cultivar. 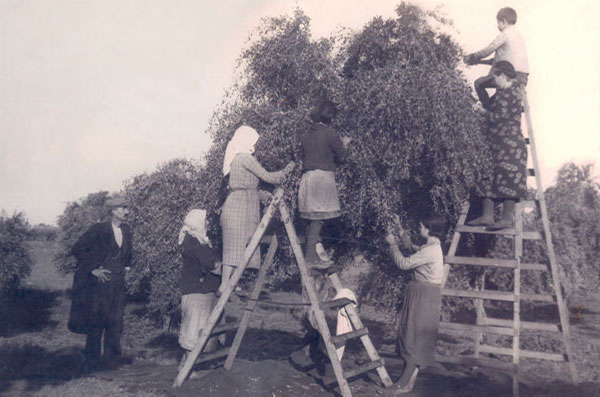 Kyparissia is situated at the foot of Mount Egaleo on the South Western coast of the Peloponnese region and has extensive sea frontage with endless sandy beaches. To the east, the surrounding forests include cypress trees and pines.

The Ancient or Upper Town is a preserved settlement 150 meters above the modern town, which is constructed on an extensive grid system that runs gently down to the Ionian Sea. The Upper Town is dominated by the ruins of a Venetian Castle that was first constructed during prehistoric times.  Early reports of the city were recorded by Homer and convey how the Cypresses or Kyparissians built many wooden fighting ships during the Trojan War.  Due to its location there have been many rulers over the centuries, especially during the Venetian period.

During Medieval times Kyparissia was called Arcadia as a result of the many Arcadians who fled and lived there following their persecution by the Slavs. During the Turkish occupation, Kyparissia was at the forefront of the Greek people’s struggle against their conquerors.

Today Kyparissia is an agricultural trade center – the town is almost completely surrounded by olive groves and other types of farming – but olive cultivation is the dominant form of agriculture. 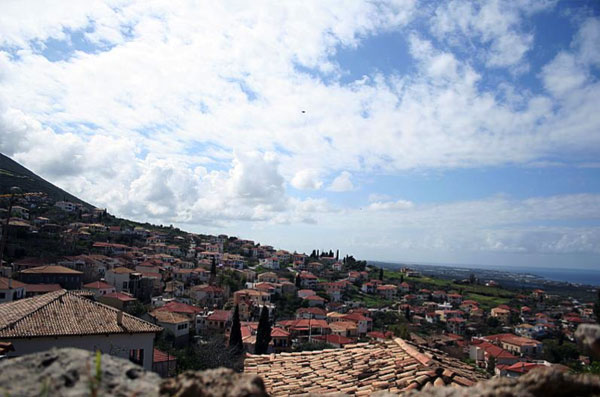 A sweeping view of Kyparissia and the Ionian Sea. 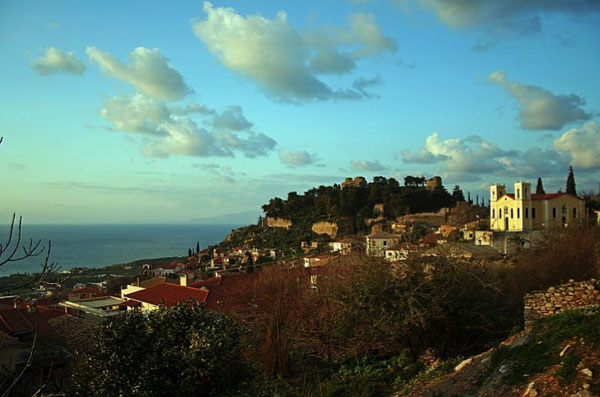 The church in the old town. 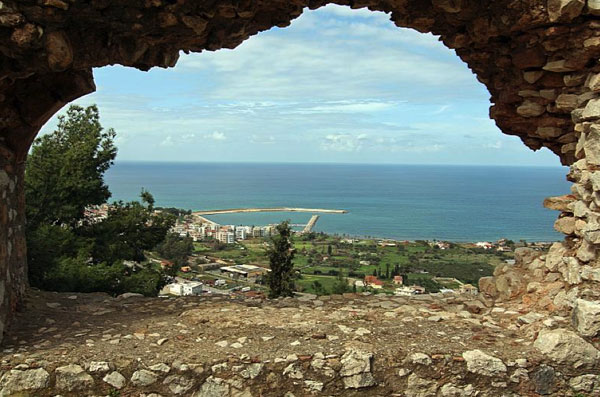 The view of the Ionian Sea from the ancient castle in Kyparissia.